Last year was definitely Khabib Nurmagamedov’s year. The Dagestani fighter won the lightweight title against Al Iaquinta and consolidated his status by beating Conor McGregor in a genuine grudge match. He was also the catalyst for one of the most dramatic moments in UFC history by jumping off the cage and attacking Dillon Danis. Cue brawl.

Now he’s sitting out suspended and enjoying the benefits of being a champion in the world’s biggest MMA promotion. He’s due to return the end of May, but he’s not looking to come back until September. His next opponent should logically be the interim champion, Dustin Poirier.

‘The Diamond’ is respected by Khabib and his fellow professionals for showing heart and dedication in a long career. However, that’s not going to stop Nurmagamedov from implementing his game and brutalizing the Louisiana native.

Khabib was in attendance at the recent UFC Fight Night in St. Petersburg, Russia. He was interviewed backstage and paid his respects to ‘The Diamond,’ and explained that he was excited by the chance to fight him.

“I think it was a very good performance from Dustin Poirier,” Khabib told Megan Olivi backstage on Saturday. “Honestly, before the fight, I though Holloway was going to beat him. This was my prediction when I talked with friends, with my father, with my team. But he impressed me. Dustin impressed me.” 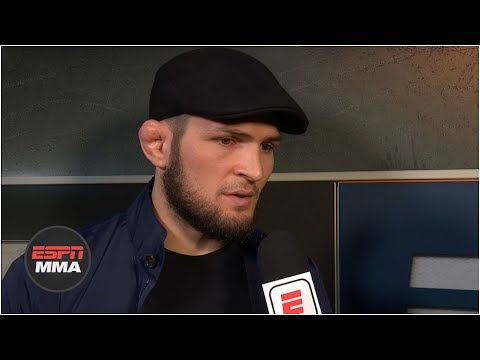 He also acknowledged how Poirier has grown with every fight. Look at the line of killers he beat to win the interim belt: Max Holloway, Eddie Alvarez, Justin Gaethje and Anthony Pettis. That is legit. Khabib said:

The Russian has basically mauled everybody put in front of him. That’s a total of 27 opponents. He may have lost one round in his UFC career so far, and that’s only because he wanted to get his breath back after pulverising Conor McGregor in a harrowing 10-8 round.

“I think I have to maul him, like I do with everybody,” Khabib said of Poirier. “This is what I have to do. I respect him as a fighter, as a human, but when we go to the cage, I have to maul this guy. This is what I want. Right now I’m focusing on September, five months before the fight, and I think it’s going to be a very good fight with him.”

Does Poirier have any hope? Well, this is mixed martial arts, so yes of course he does. ‘The Diamond’ is a superb boxer and his main chance of winning is by turning it into a dirty brawl. However, ‘The Eagle’ should justifiably be the overwhelming favourite. This promises to be a good one.

Darren - Mar 15, 2019 0
'El Cucuy' is Clearly Going Through a Rough Time Right Now... The Lightweight Contender Has Been Slammed With a Restraining Order by His Wife...