Every once in a while, something magical happens inside the cage. Something so amazing, that it just makes you go “Wow!”. Like maybe a fighter pulling off an insanely difficult move. Or maybe a fighter coming from behind to take an improbable victory.

Or maybe a fighter getting clocked so hard in the face that his eyeball falls right out of the socket!

Yup, that’s right. You heard that correctly. And it actually happened!

Sounds pretty far-fetched. But in the world of mixed martial arts, in the world of real combat, anything can happen. Even losing an eye mid-fight is not totally out of the ordinary.

What is the worst injury ever in mixed martial arts history?

It all went down at an amateur mixed martial arts show in 2014. When fighter Alan Grays got kicked in the head so hard that his prosthetic eyeball flew right out of it’s rightful place in his eye socket.

Grays was on the wrong end of a brutal head kick from opponent Jose Johnson during a fight in Michigan. In a slow motion replay, the glass eye can be seen rolling away on the canvas.

Although the referee rightly called for a pause to the contest. He just barely narrowly avoided stepping on the eye as it rolled right past his feet. Amazingly, Grays was able to get back up to his feet. However, his right eye was obviously closed.

Like the pain of losing his eye mid-fight wasn’t embarrassing enough, he went on to lose the fight as well.

It was a pretty crazy scene when it happened. And probably something that will go down as one of the most bizarre occurrences in mixed martial arts. There have been some pretty crazy things that have gone on inside the cage, but this one is near the top of the list.

Fans have had mixed reactions to the controversial sequence.

Alan Grays may have a say

“I guess he never saw it coming,” one fan went on to comment.

“Fighting with one eye, now that is what I would describe as very tough,” another fan said.

Obviously the most glaring question raised is how Grays was actually allowed to fight in the first place. With his vision impaired, he is at a natural disadvantage and should have not been allowed to compete. The depth perception must have been totally out of whack.

Needless to say, when you’re fighting for these small promotions, sometimes anything goes. Despite the gruesome scene, at least it wasn’t his real eye that popped out. 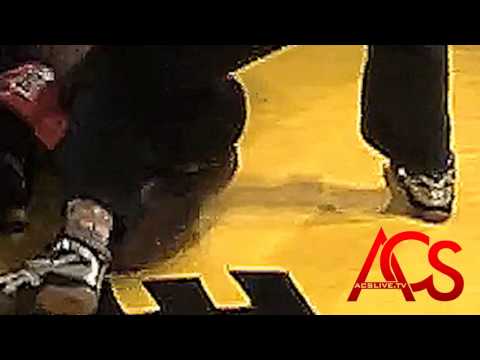 The Alan Grays debacle has been voted in some circles as the worst injury in all of mixed martial arts. But honestly speaking, Anderson Silva’s infamous leg break may top the charts as worst of all-time.

Nevertheless, Alan Grays will go on to live in infamy. Not because of anything spectacular he did inside the cage, but because of that one head kick he took like a champ that knocked his eye clean off its socket.

Gentleman Jeff - Aug 9, 2017 0
New team, new trainers, and a potential new career for Ronda... Ronda Rousey has not officially retired from MMA. She continues to be under contract...

WATCH: MMA Fighter Poops Himself While Getting Choked Out