It’s a pretty good gig being a Diaz brother. They spend their lives getting paid to go to nightclubs, hang out, and smoke weed. Sure, Nick’s love of the green landed him with a four-year ban after his most recent fight, against Anderson Silva, was overturned to a No-Contest. That ridiculous ban was reduced and now Diaz is cleared to return when he wants.

So far there’s not really been much of a sign that he’s going to come back anytime soon. He has been talking the talk a little bit though, with Darren Till and Tyron Woodley receiving his contempt after they fought a couple of weeks ago. If the right opportunity comes up, he’ll come back.

Now Conor McGregor and Khabib Nurmagamedov have been targeted by the Stockton native. Diaz has a little message for both men, which you can watch below. 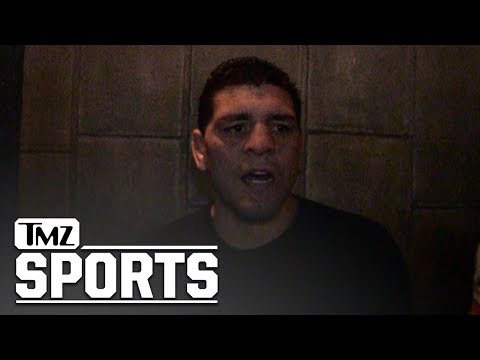 What is it about Diaz and doing interviews while he’s obviously half-inebriated? It seems to be his thing right now. It’s ok Nick, we dig it. TMZ caught up with him while he was out socializing at Warwick nightclub in Hollywood, and they asked him a few questions about Jon Jones and Conor McGregor. As ever, he was good value.

If they’re not that good, but Conor beat Nate, does that mean the younger Diaz isn’t good either?

Right now it seems like Diaz is going through a period of mental rehab after a grueling few months where he had to deal with allegations of domestic violence. Those charges effectively prevented him from even thinking about making any sort of comeback, but now he can get his life back on track.

A rematch with Georges St. Pierre has been discussed but the Canadian doesn’t fancy it. Diaz clearly wouldn’t mind having a shot against McGregor or Khabib though. It’s highly unlikely he’d walk straight back into a title fight at either welterweight or middleweight, so maybe something can be sorted in between.

In the meantime, Nate Diaz is currently at war with the UFC. Nick’s younger brother stirred the world when he claimed to be fighting for the 165 lb title. This has been denied by the UFC. He’s supposed to be fighting at UFC 230, which incidentally still doesn’t have a main event. It’s been a PR disaster for the promotion.

As you can see though, Diaz is in the shape of his life. Maybe the filter is good, but he looks like an absolute beast in that photo. It’s just as well because Dustin Poirier is a very dangerous opponent and Diaz will have to be on his best game. You can bet he will be because the prize for beating Poirier could be the McGregor trilogy fight.

Salvador Sanchez - Jan 24, 2017 3
Wow, Mike Goldberg finally reveals what really happened... Among many controversial happenings in 2016, Mike Goldberg's release from the UFC was right up there. Having...

WATCH: The Most SAVAGE Finish in BJJ History

How to Do Sports Betting the Right Way