If you thought Sage Northcutt was ripped, wait until you get a load of his sparring partner…

Since joining the UFC in 2015, Sage Northcutt’s popularity has rocketed. Part of a generation of wholesome good-looking stars in the promotion’s hunt for the casual fan, ‘Super’ Sage is quite the character.

With his action man-type physique and crazy acrobatics, Northcutt is a clean-cut fighter, quite the rarity. Northcutt finished Francisco Trevino and Cody Pfister in his first two fights for the promotion but came unstuck in his third.

Against Bryan Barberena, ‘Super’ Sage suffered his first professional MMA loss. Competing in karate, bodybuilding, and kickboxing since he was a toddler, Northcutt is naturally competitive while being the least explicit person you’ll ever meet.

Picking up another win at UFC 200 against Enrique Marin, Northcutt would then lose to star-killer Mickey Gall in December of last year. Since then, Northcutt hasn’t fought but is currently booked to face Michel Quiñones on November 11.

Northcutt Gets The Hype Train Rolling Again With Viral Video

How better to get your name out there again than sparring with a huge bodybuilder. The man Northcutt is rolling with is called Blessing Awodibu, and he’s one of the most shredded individuals you’ll ever see.

During the expo in China, Northcutt teaches Awodibu a few moves before taking him down to the mat.

Watch on the Youtube player below, and read on for Northcutt’s comments about people wanting to punch him: 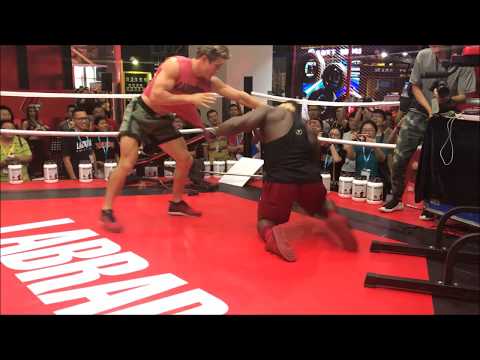 “I always have something I’m learning or correcting in my technique. There are always little mistakes you’re trying to improve and make better and that’s what I’m doing. It doesn’t really affect me that I’m fighting so often. It’s actually a really big honor to fight again so soon.”

Georges St-Pierre – he’s so awesome,” Northcutt says. “It was very great getting to roll around with him and getting to train with him. He’s so nice and so friendly and he’s very humble too. He’s almost like your next-door neighbor and you’ve known him your whole life. That’s how nice he is.”

Certainly needing a win at UFC Fight Night 120, Northcutt will no doubt bring his super-clean trash talk along with him. Being just 21 years of age, Northcutt has a bright future ahead of him.

Now he’s switched to Team Alpha Male in Sacramento, California, perhaps we’ll see those holes in his game stitched up and a more complete fighter in November.

Salvador Sanchez - Aug 10, 2016 0
It's not long now until the UFC gets the Conor McGregor show on the road again. We are deep in to the hype stages...

PIC: Miesha Tate Does a Handstand… While Pregnant

Video: We Remember The Greatest Through His Words

Having A Bad Week? This Video WILL Cheer You Up

Dillian Whyte forces Povetkin’s corner to throw in the TOWEL