Rising through the ranks since winning The Ultimate Fighter in 2011, Tony Ferguson is a legitimate force. Currently riding a nine-fight win streak, ‘El Cucuy’ holds the most consecutive wins in the division’s history.

During his streak, Ferguson has collected wins over Rafael dos Anjos, Josh Thomson and Edson Barboza to name a few. At UFC 216 on October 7, Ferguson gets his first crack at UFC gold against Kevin Lee.

Due to the situation at 155 pounds, Ferguson won’t be fighting for the undisputed title. Having been inactive in MMA since November 2017, Conor McGregor is holding the belt hostage.

Instead, ‘El Cucuy’ goes up against Kevin Lee for the interim belt. Even with two hungry contenders facing off for the junior strap, there’s still no guarantee of a unification bout for the winner.

You’d expect a fiery warrior like Ferguson to bump heads with his opponent before UFC 216. Even a potential future opponent could be in the firing line, but someone four divisions up?

During a media lunch today (September 28, 2017) ‘El Cucuy’ and Fabricio Werdum were involved in a bizarre heated moment.

Watch as Tony Ferguson tells Fabricio Werdum to shut up, then things get really ugly. (Translations below) 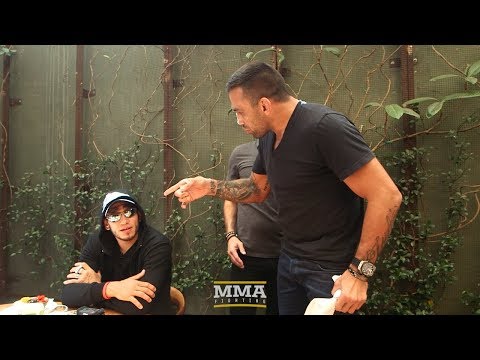 “When I’m talking you shut your mouth,” Ferguson said.

“Shut your mouth, you f*cking faggot,” Werdum responded. “Don’t talk to me like that, that’s not how it works. You can talk like that to your division but with me you can’t talk like that faggot.”

“The guy told me to shut up, man,” Werdum said. “We’re both sitting there to do some media. Someone was asking him a question but I turned to talk to another reporter, speaking very low since we were close to each other, and he turned to me and said ‘shut your mouth’ in Spanish, ‘shut up because I’m speaking.’

“I know the guy. He’s not a friend, but I know the guy. He came in with all this f*cking negative energy, I went to shake his hands and he wasn’t pleasant. That’s okay, maybe he’s focused, he’s hungry, on a diet, but that’s his problem, so I stayed cool. When I went to talk to another reporter he tells me to shut up? What is this? Are you crazy? I didn’t beat him up there because something could happen and I could lose my fight.

Darren - Feb 23, 2020 0
Tyson Fury is a heavyweight champion of the world again after handing Deontay Wilder his first-ever professional defeat. The Gypsy King was an underdog...

Khabib Explains: “You Can’t Keep an Eagle in a Cage”

Shane Carwin Coming Out of Retirement For UFC Title Run

WATCH: Cody Garbrandt Walks Out On Dominick Cruz During Interview

Joe Rogan Has Outrageous Opinions On Mayweather vs. McGregor