Martial arts is great knowledge to have, especially when it’s used in the right way — which is in self-defense. To protect yourself and those around you from physical harm, it’s an ability everyone has the right to. But what if this kind of knowledge and power falls into the wrong hands?

Martial arts, when used correctly, is absolutely amazing. When used the wrong way however, it can be devastating. And it can be downright ugly.

Former UFC featherweight and winner of The Ultimate Fighter: Brazil 1, Rony “Jason” Mariano Bezerra, just gave us one of the most graphic examples of when martial arts goes wrong.

Bezerra was recently caught on camera hitting an unknown woman several times with his bare fists. The incident happened during a party in Bezerra’s hometown of Quixada, Ceara, Brazil. A viral video depicting the incident made the rounds and went instantly viral on social media.

The aforementioned video was posted on Youtube last Sunday by Tudo Sobre MMA. It clearly depicts Bezerra not just hitting the defenseless woman multiple times, but also having to be held back by random guys. If some dudes had to hold him back in fear that he may do irreversible damage to the woman, you can imagine how off the rails Bezerra actually was.

So far, the UFC has made no statement nor announcements regarding the incident. Bezerra has also yet to comment. Bezerra’s contractual status with the UFC is also unknown at the moment. 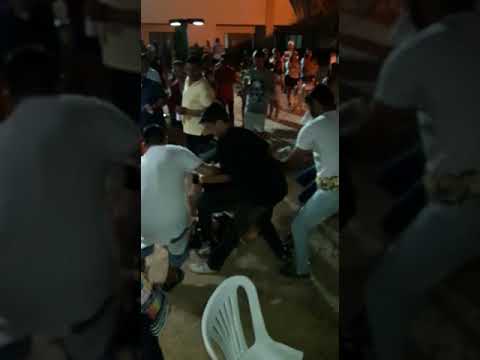 Rony “Jason” Mariano Bezerra has a history of aggression

This isn’t the first time Jason has been seen unable to control his temper. After being stopped by Jeremy “Lil’ Heathen” Stephens in 2013, Jason punched a hole into the wall out of frustration. He ended up having to go to the hospital to get his hand stitched up. Following the incident, the Brazilian Athletic Commission of Mixed Martial Arts (CABMMA) suspended Jason for 30 days.

Although Bezerra hasn’t won a bout since 2014, a technical knockout victory over little-known Steven Siler at UFC Fight Night 38: Shogun vs Henderson 2, he recorded a victory over Damon Jackson in May of 2015 at UFC Fight Night 67: Condit vs Alves. However, this victory was overturned by the Brazilian Athletic Commission of Mixed Martial Arts (CABMMA).

The organization overruled the victory when Bezerra tested positive for performance enhancing substances. The 33-year-old “Jason” last competed in March of 2017, dropping a three-round unanimous decision to Jeremy Kennedy at UFC Fight Night 106: Belfort vs Gastelum.

Fighters who can’t control their tempers

Koppenhaver battered Mack to near-death in 2014, and was later convicted in 2017. He is now serving a life sentence.

Darren - Sep 27, 2019 0
Is Justin Gaethje Khabib Nurmagamedov’s Kryptonite? Justin Gaethje is having a great 2019. After knocking out Donald Cerrone he's in the best position of his...