In recent years there has been a trend of popular YouTuber’s looking to prove their toughness by trying their hand at training, sparring and in some instances even competing in MMA, and in this article we’ll look at how they faired in one of the world’s toughest sports. 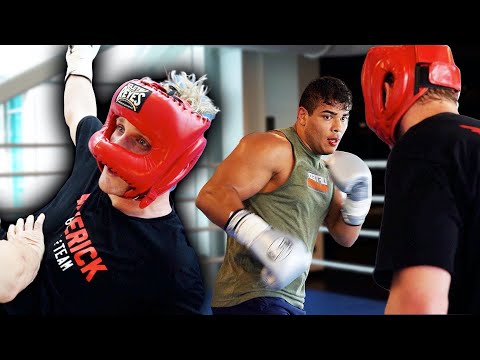 Logan Paul is one of YouTube’s biggest stars with over 20 million subscribers on his channel and has used that fanbase to help carve out a niche for himself as a celebrity boxer too.

In the past Paul has had two high-profile boxing bouts against fellow YouTuber KSI, with the first being an amateur bout, which ended in a majority draw ruling, before he lost the subsequent rematch by a controversial split decision verdict (Paul was deducted two points in the fourth round).

Paul has also signalled his interest in having a fight in the UFC under MMA rules and does actually have a high-school background in wrestling.

With that in mind, Paul recently showed up at the UFC’s Performance Institute in Las Vegas and agreed to spar with one of the promotion’s most feared strikers, Paulo Costa, who is expected to fight for the middleweight title later this year and has a perfect 13-0 record, including 11 finishes by T(KO).

During the resulting sparring session Paul appeared to take a huge right hand from Costa that knocked him out, though on closer inspection there’s a sense that this was more of a publicity stunt and that the Brazilian striker actually connected with his shoulder.

Either way, with more than 3 million views on YouTube in less than 24 hours, the stunt was great publicity for the UFC and Costa in particular, while later in the video Paul had a chance to show off his wrestling as he engaged in a competitive grappling battle with Costa.

Salvador Sanchez - Sep 10, 2017 1
It looks like former four-division boxing champion Adrien Broner might be on his way back to jail again... Boxing and combat sports as a whole...

BREAKING: Khabib v GSP is Officially in the Works