This is a Potential Match-Up That Genuinely Got Fans Excited… The Veteran Legend Donald Cerrone Against ‘The Notorious’ Conor McGregor in a Lightweight Head-to-Head… Despite Being Booked to Fight Alex Hernandez, ‘Cowboy’ Has Confirmed a Fight With McGregor is on the Horizon…

Oh, wouldn’t this be a great fight? When fans heard that Donald Cerrone and Conor McGregor could be fighting soon, most people agreed that it made a lot of sense for both men. ‘Cowboy’ is a veteran with the most wins in UFC history. He’s been a company man and can still hang with the best. Give him a payday.

Meanwhile, McGregor needs to be very careful about who he fights next. Ideally, he will want to fight a decent ranked opponent who is beatable. Now, we’re not disrespecting ‘Cowboy’ when we say this – he’s as good as anybody on his day – but McGregor would surely be confident about finishing the 35-year-old Ohio native.

Now, Cerrone has confirmed that his upcoming fight against Alex Hernandez, on January 19 won’t stop him from pursuing a mega match-up with McGregor. He says by beating Hernandez, he’ll prove to the UFC that he can make weight and that’s all they need to hear.

Cerrone confirmed to ESPN that this potential fight is still exactly that. He believes that it makes sense for both parties and that the UFC will be happy to make it happen. He said:

“I think McGregor’s side is interested in it, I know I’m very interested, and for the UFC, that’s a money fight. By no means am I overlooking Alex. I’m focused on getting through him, and Conor is potentially what’s next. I don’t see why he would turn the fight down. I’m interested to see how it all plays out. I’m pretty sure Conor and I will be meeting in the Octagon soon.”

“Four guys turned down this fight before Alex took it. I won’t say who they were, but all are top eight in their respective divisions. I want to come back guns blazing. The UFC wants to make sure I can make 155, and then we’re attacking the guys at the top. That’s what this fight is about.”

After 46 octagon appearances – with his last ten at welterweight, you’d be forgiven for thinking Cerrone was drifting towards the end of the career. But that’s not the case. He’s dropping down to 155 lbs and aiming for a title shot.

“This first fight is about getting back into the rankings, but from that point on, we’re going to have to sit and choose opponents,” Cerrone said. “Because getting all the way to the front door, only to have the guys ahead of you say they want to wait, so you give an up-and-comer a shot at your position — I’d just be turning myself into a gatekeeper, which is not what I want.

“It’s time to get that belt. It’s the last thing I need for my legacy. So I plan on doing that, and doing whatever it takes to get there.” 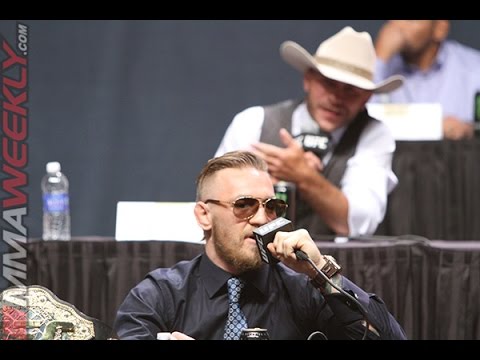 At the end of the day, stranger things have happened in the UFC. Nobody can begrudge Cerrone for dreaming of winning a belt. All it takes is one injury to an opponent, and then suddenly you get a phone call from Dana White asking you to jump in as a last minute replacement.

That’s exactly what happened to Michael Bisping when he tore the middleweight strap away from Luke Rockhold. He won the belt on two weeks notice. With Tony Ferguson and Khabib Nurmagamedov likely to be booked for an incredible fifth time, who knows what the MMA gods will have in store for us in 2019?

WATCH: Jesus Christ Goes Viral By Slapping The Soul Out of...

Salvador Sanchez - Feb 21, 2018 0
Jesus died for our sins, but Super Jesus doesn't give a fuck.Yes, you read it right, Jesus Christ has been resurrected and he is...

Charles Oliveira vs Michael Chandler for the VACANT Lightweight Belt at...

WATCH: Gervonta Davis Takes a Swing at His Baby Momma