When you decide you are going to mess with someone, you better make sure they aren’t a professional fighter first, because even that glass bottle won’t help you. MMA fighter vs street fighter with weapon video…

It used to be that if two gentlemen had a difference, they could take it outside or to the boxing ring and settle their beef with fists only. Now days it seems like grabbing a weapon to up the chances of victory is commonplace.

It’s a sad fact, but people would apparently rather do permanent damage to their advisory than run the risk of taking a beating, or even getting punched at all. The subject of today’s article is a prime example of when acting tough with a weapon goes terribly wrong.

The subject of today’s article is not only a well known gangbanger and backyard brawling buddy of Kimbo Slice, but he’s a professional MMA fighter too. Known as ‘Level,’ real name Rene Martinez, he holds a professional mixed martial arts record of 6-1, including a submission victory over boxing legend Ricardo Mayorga.

In case you don’t know who level is, here’s some of his handy work: 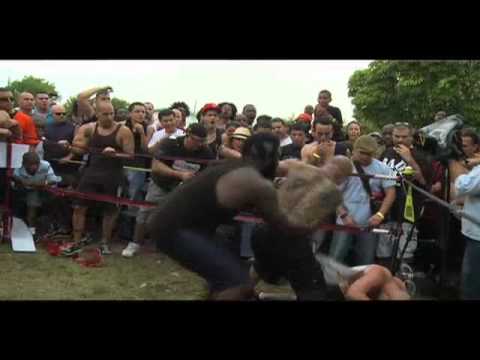 So what happened when a wanna-be gangster threatened Level with a bottle in a tattoo shop recently?

Skip to page 2 for the full video…