Floyd Mayweather and Conor McGregor Are Set to Face Each Other Yet Again… But Not Exactly The Way You’re Thinking… The Pair Are Set to Appear on a Remake of Superstars in Tokyo, Japan, on New Year’s Eve…

It was the rivalry we never knew we wanted. When Conor McGregor first said he wanted to fight Floyd Mayweather, we all laughed at him. But then he became ultra-famous and in 2016 we got the match-up in Madison Square Garden. It was an enthralling carnival of an event, with Mayweather’s class proving too much for the former UFC champion.

Since then, McGregor has fought just twice in MMA. Meanwhile, Mayweather officially retired after beating McGregor but did return for an exhibition match against the smaller kickboxer Tenshin Nasukawa on New Year’s Eve last year. He sat the Japanese fighter down three times before the ‘exhibition’ was stopped in the first round.

Now McGregor and Mayweather look set to meet again after reports suggest that they will both be taking part on a revamp of the Superstars TV show, which will be filmed live in Tokyo, Japan on New Year’s Eve.

McGregor has been the focus of a lot of media attention over the last couple of weeks after the video footage of him punching an old guy back in April went viral. He then had an interview with Ariel Helwani that got some fans back on side. ‘The Notorious’ is looking for an opponent to fight early next year, but according to the Business Insider, andSouth China Morning Times, has been offered $10 million to take part on the Superstars show. A source said:

“Conor is on the edge of signing. There is no direct combat involved so it doesn’t breach his UFC contract and he should be fine to take part.”

Superstars was very popular in the 1970s. Basically, it sets athletes against each other in a series of events resembling a decathlon. Athletes had to compete in 8 out of 10 events, collecting points for each win, with the most points making you the champion. TMZ asked Mayweather how he’d feel about taking on the much younger McGregor. He responded: 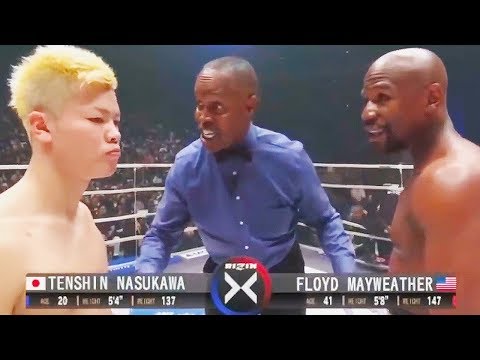 Another man who looks set to take part in the show is Tenshin Nasukawa. The unbeaten RIZIN superstar is set to compete on the show alongside another as yet unnamed Japanese fighter. Basically, Japanese money is just chucking money at everyone and we love it. Mayweather addressed criticism about his exhibition last New Year’s Eve in the Saitama Super Arena.

“It was all about entertainment – we had a lot of fun,” Mayweather said. “They wanted this to happen in Japan, so I said ‘why not?’

And that’s exactly why McGregor and Mayweather are happy to take part in this crazy TV show. $10 million for a night’s work? Sounds pretty good. And you can bet that ‘Money’ is getting more.

Darren - Sep 12, 2019 0
Georges St. Pierre Believes That Nick Diaz Has Wasted the Best Years of His Talent And Could Have Been A Welterweight Champion... Is He...

Top 10 Boxers In The UFC Today