Khabib Nurmagomedov wants to fight at UFC 219. The event is scheduled for December 30th, 2017 inside the T-Mobile Arena in Las Vegas. The promotion traditionally puts on one of their biggest shows of the year just before the calendar turns and this year will be no different.

Surprisingly, Khabib has said he wants to face Tony Ferguson and not Conor McGregor at the event.

Unfortunately for Khabib, the UFC might be hesitant to put him in a marquee main event anytime soon.

It has almost been a full year since his last fight, a decision victory over Michael Johnson at UFC 205. He was scheduled to face Tony Ferguson for the interim lightweight championship at UFC 209 but pulled out of the fight last minute. He later ate tiramisu and the internet exploded. Ferguson issued an unsympathetic response to Khabib and his team:

Ferguson issued an unsympathetic response to Khabib and his team:

Your A Joke @AliAbdelaziz00 & Horrible Mgr. @SeanShelby Offered @TeamKhabib To Fight Me In Nov & Oct. U Turned Both Down. Lying 2 Save Face https://t.co/2XrVhHeu8L

Conor McGregor is equally as unimpressed with Khabib’s history of pull-outs. He had the following to say regarding Khabib even before the canceled fight at 209.

“He’s fought once in eight years,” McGregor said. “He ain’t fight too frequent for my liking. For me to commit to something like that, I need to see solid proof that people are gonna show up and he’s a consistent pull-out merchant. He had a good performance tonight. Fair play to him.

Before UFC 209, Conor had expressed to Dana White that a fight with Khabib in Russia was appealing to him. There has been little talk of such a bout since UFC 209, however.

“Because, my opinion, I think Tony Ferguson is the real champion. That’s why,” – Khabib Nurmagomedov on why he’s calling out Ferguson and not Conor.

While many felt Khabib’s frequent pull-outs have to do with him biding his time for a big-money fight with Conor, he is now sounding as though the opposite is true. Khabib is now saying he wants to face El Cucuy because he considers him the real champion.

“I don’t think, if I fight versus Tony Ferguson, this is an interim belt. Officially, yes. But people want to see me versus Tony Ferguson. I think this is a much better fight, for everything. If I beat Tony Ferguson and take the interim championship belt… Conor’s the official champion, but he’s not the people’s champion.”

“My opinion, I have to fight with Tony. All of my fans, everybody wants this fight. For me, everything isn’t about money. For me, it’s what my father wants, my team, my management team, my friends. This is more important for me.”

You can watch the whole interview below: 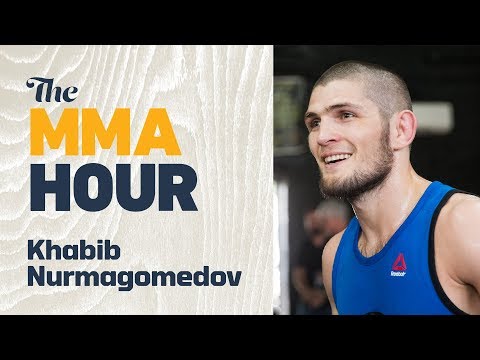 WATCH: Urijah Faber Reacts to Car Driving Over His Foot

Darren - Jun 19, 2018 0
Team Alpha Male's Urijah Faber Has Been Driven Over By a Car in Singapore But Lived to Tell The Tale... Urijah Faber was extremely popular...

Diego Sanchez will fight Cowboy Cerrone as his retirement fight