Why is Conor McGregor fighting again? He has made his money and appears to have no good reason to risk his health. However, his head coach John Kavanagh has explained that his fellow Irishman loves fighting too much to walk away. In an interview with The Mac Life, he explained it all.

‘The Notorious’ will fight Donald Cerrone at UFC 246 in less than two weeks. The fight will go down in the T-Mobile Arena in Las Vegas. Cerrone is an interesting opponent. A wily veteran, Cerrone is famously very active. ‘Cowboy’ goes on winning streaks but historically falls short against elite opposition.

This will be a massive test of McGregor’s current state. If he remains an elite fighter then he should prove too much for ‘Cowboy.’ But Cerrone is well capable of knocking him out or submitting him. Furthermore, welterweight adds a fascinating dimension to this fight. Only time will tell. 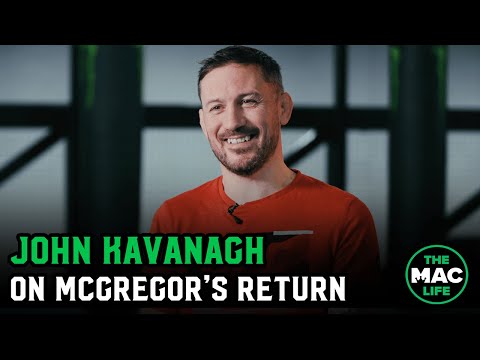 Kavanagh raved about McGregor’s fight IQ. He says that the team are allowing the Irishman to set the rules for his camp. In short, they believe that he knows more about fighting than the rest of them put together. This is definitely an unconventional approach but McGregor does appear more motivated than before.

“It’s not so much about us coaches sitting down to game plan and then filling Conor in. Conor knows more about fighting than the rest of us put together.”

The big question is what is McGregor’s motivation? It can’t be money anymore because his fortune is made. Is it revenge and the prospect of getting even with the UFC? Not according to Kavanagh. He believes that love is driving his pupil forward. TThe father-of-two has a family to provide for. He also adores fighting so that is why he is coming back.

“It’s different than the motivation being revenge,” Kavanagh said. “The motivation here seems to be love, and love is stronger than revenge.”

Kavanagh is also known as the Irish Confucius didn’t you know?

There has been a lot of talk about McGregor’s gas tank. He has a reputation for tiring after two rounds. However, Kavanagh disputes this. He says that McGregor is basically going to be fighting at a training weight so there will be no issue. Of course, only time will tell if this is true or not. But the doubts are justified.

“I could see it being in the championship rounds,” he said. “That’s the mindset I personally have – and be ready for that. Now, he could spark him in seconds. But there’s a bit of extra weight involved, so I think in the later rounds. Would it be a late-notice fight if we were already training for it?” Kavanagh said. “Weight-wise, it’s no problem. It would just be if we’re training.”

One thing is for sure, this will be one of the most-watched fights of the year. Anything McGregor does is box office. Cerrone is a dangerous opponent so this is an intriguing match-up. We’re two weeks away and anything can happen.

Darren - Dec 7, 2018 0
This Wacky Match-Up is Going Down... The Rules for Floyd Mayweather v Tenshin Nasukawa's Exhibition Match Have Been Officially Released to the Public...  His name...