Tito Ortiz is a true MMA legend. You have to respect him for all that he’s achieved in the sport. The 44-year-old is a former UFC light-heavyweight champion and a pioneer in a golden era for the UFC. If you’re a purist who has been following the sport since it began, then there’s a good chance this was your favourite time.

Ortiz has been relatively active over the past couple of years. Despite his advancing years, he’s not shy to step into a cage. After leaving Bellator he fought and knocked out Chuck Liddell in a shambles of a trilogy fight. That was promoted by Oscar De La Hoya. Now’s he’s will fight under the Combate Americas label.

But Ortiz still believes that he could beat Jon Jones if they fought. We’re not exactly sure what he’s been smoking but we want some of it. It’s obviously strong. Do you think he’s talking nonsense or does he actually have a chance? 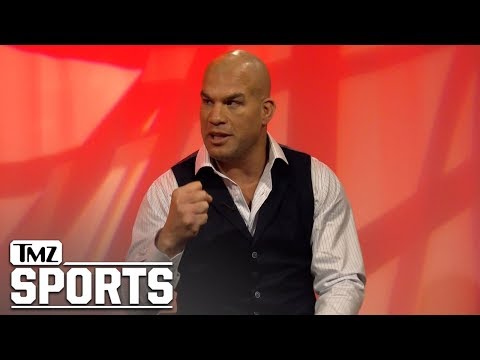 Blame TMZ Sports for this absolute nonsense. Let’s be real, the only reality where Ortiz beats Jones is the one where the latter decides to soccer kick the other into oblivion and gets disqualified. It’s just not going to happen. Even in his prime, Ortiz would probably have been outclassed by one of the greatest fighters ever to do it. However, when he was asked if he would fight Jones, he was emphatic.

In fairness, he didn’t say he’d beat him the first time. But then he did. Oh, Tito. We’re sorry but it’s just not going to happen. We’d love to see it. He said:

” think I could beat Jon Jones. I think I got a good chance. I really do think I got a good chance. And people say ‘Oh Tito, bullshit, you’re over the hill, whatever. Come to my camp. Come train with me. Come wrestle with me. Come do jiujitsu with me. Watch my weight training, watch my biking and my stairs that I do. I push myself harder than I’ve pushed myself my entire career. I’m doing amazing. My mind is just in the right place and my body is in the right place.”

Ortiz then went on to explain how he’s recovered from injury woes. We’re glad he’s in a better place, but there’s a big difference between fighting Jones and Alberto Del Rio, who he’s set to take on on December 7th. He explained:

“When you don’t have a L45S1 bulging, a ruptured disc, a ruptured disc in your neck or a torn ACL and all these little damages that you have and try to get through camp. “You gotta understand, through 2006 to 2012 I went through camps of training for 3 days and then taking 4 days off. Only thing that made me survive those draws and split decisions I lost was being up at altitude. That was the only thing that kept me alive because I had cardio.”

“And I was in such bad damage, my body was in a bad place. Especially with my ex that I was with, she was telling me what a horrible person I was and a horrible father. And that just eats you alive in general. But now I’m just on a different level, completely.”

John - Apr 28, 2021 0
Big Media personnel is running out of ideas after Usman's dominant win over Jorge Masvidal. Although it is possible that Usman can become a...