Check out the INTENSE staredowns from the UFC 207 weigh-ins…

Heading in to UFC 207, a lot of focus has centred on Ronda Rousey. Previously the most dominant champion in women’s bantamweight history, her comeback has drawn tons of attention.

Turns out there is a lot more talent than just ‘Rowdy’ going to Las Vegas on Friday. Obviously being under-promoted, current champion Amanda Nunes is a legitimate beast. Let’s not forget about the tense co-main event for the evening too.

Sharing one heck of an intense rivalry, Dominick Cruz and Cody Garbrandt are going to war lately. Heated confrontations and interviews make it look like ‘No Love’ is losing his cool. It seem Cruz’s trash talk is seriously effective.

At the traditional weigh-ins show this evening, things started to boil over. ‘The Dominator’ and Garbrandt locked horns in a big way. Looking like he was still frustrated, the challenger reacted to the champ calling him ‘bitch.’

Watch the video of the traditional UFC 207 weigh-ins show below: 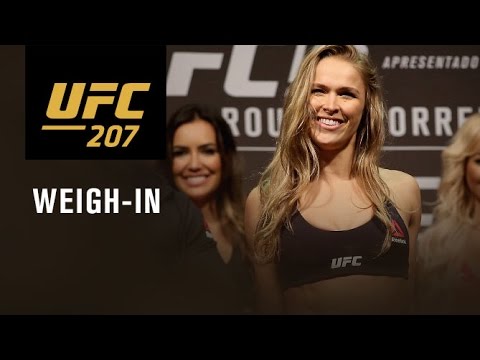 Unfortunately for Johny Hendricks and Ray Borg, they both missed weight. Their respective fights with Neil Magny and Louis Smolka are still happening, but the overweight fighters must pay part of their purse to their opponents. Here are the full UFC 207 weigh-ins results:

*Hendricks and Borg both missed weight and will be subsequently fined a percentage of their purses.