One of the World’s Greatest Boxers, Gennady ‘GGG’ Golovkin is Very Interested in an MMA Crossover Fight…

Hmmm now, what do you think about this? Gennady Golovkin has openly admitted that he is interested in fighting under MMA rules in the future. That’s not fake news, he’s genuinely said it and you can watch the video below. Of course, he could be just trying to make headlines, but there’s something about the Kazakh champion that makes us believe him.

He’s the WBA, WBC, IBO, and former IBF middleweight champion. Every ranking system has him as one of the top 5 pound-for-pound fighters in the world. He’s truly a phenomenal talent, with an unbeaten record of 38 wins and 1 draw.

That draw was the controversial result of his 2017 fight, against Saul ‘Canelo’ Alvarez. Most people think that GGG did more than enough to win, but bizarre judging – Adalaide Byrd we’re looking at you – cost him. Now Golovkin has revealed his interest in crossing over to MMA in the future. 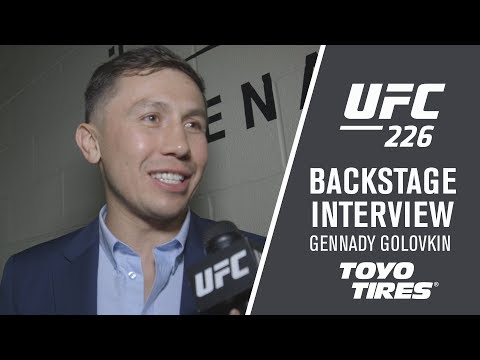 Golovkin holds the highest finishing rate in middleweight history. He’s also never been knocked down or out in 388 amateur and professional fights. Luke Rockhold wants his chin. He told the UFC’s Megan Olivi that he would definitely consider crossing over to MMA in the future. He said:

“Absolutely, why not? It’s a sport, I am a professional athlete. So many people have good experiences from fighting, you know? Right now I’m going to the arena to enjoy UFC 226.”

Well there, you go. Short and sweet. Of course, he’ll have watched with great interest how Floyd Mayweather earned a cool $200 million dollars from fighting Conor McGregor. Freak contests are a guaranteed massive payday. Would you pay to watch him fight Tyron Woodley for example?

The Kazakh champion expanded on why these sorts of fights captivate fans. It’s all about the energy.

“I feel this energy,” GGG said. “Everybody likes Conor McGregor. He is a very good athlete, a professional fighter. The last fight with Floyd, he went into boxing, this was difficult for him, but he looked good. I think if Mayweather would come to the UFC, it would be a very different story.

I Like so many fighters, many champions – men, and women. I can’t say who is my favorite because everybody is different. I am enjoying my life, I like sport, this is a true sport. Conor, Khabib, these guys are a different level, not like everybody.”

Right now though he is definitely focused on taking down ‘Canelo’ and setting the record straight. After the Mexican fighter tested positive for banned substances – which he blamed on contaminated meat – his credibility has been questioned. Golovkin wants to win. He said:

It would take a brave man to bet against him.

Salvador Sanchez - May 14, 2016 0
Weight cutting is a high risk method of gaining an advantage in a fight. For those not familiar with how/why fighters drop such huge...

WATCH: Motorcyclist Smashes Out Two Men Who Kicked His Bike

Khamzat Chimaev Has a Brutal Warning for Israel Adesanya