Khabib Nurmagamedov Has Explained Exactly Why He Launched Himself at Dillon Danis, After Beating Conor McGregor at UFC 229…

Next Tuesday, Khabib Nurmagamedov’s fate will be decided by the Nevada Athletic Commission, alongside that of Conor McGregor, and Dillon Danis, after they were sanctioned for their roles in that brawl at UFC 229 in November. Jon Jones will also be investigated for having one too many picograms in his system.

Khabib doesn’t seem too worried about any ban that he might face, and why would he? He’s the undisputed UFC lightweight champion of the world, and one of the most feared fighters on the planet with a frankly ludicrous MMA record of 27-0.

The Dagestani fighter was interviewed by Australia’s Submission Radio and he explained some interesting points, including why he decided to attack Dillon Danis after beating Conor McGregor. 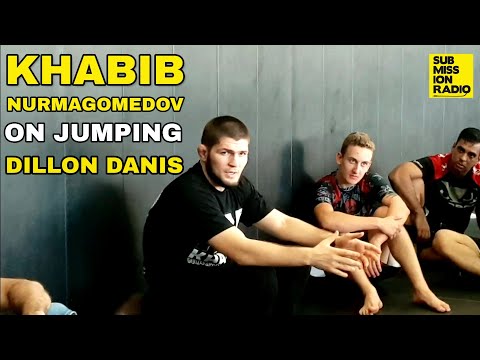 According to Khabib, he jumped on Danis because he was the youngest member of McGregor’s team. He said that John Kavanagh, McGregor’s head coach (42) was almost as old as his own father Abdulmanap (56). It’s a bit harsh that, because Kavanagh is a very calm and levelheaded guy, with none of his star pupil’s trash talk. Khabib said:

“I didn’t hear him. I jumped on (Danis) because the other corner is too old – because Conor’s other corner and coaches are too old. That’s why I jumped on him because he’s almost like my age. If I jumped on (McGregor head coach John) Kavanagh, I don’t think it’s too old because Kavanagh can’t fight me.

“In the fight, I didn’t hear him because it was too loud. But I don’t like his whole team. If I had a choice (for) what I (was) going to do, but all the other coaches were too old for me – they can’t fight with me; they’re almost like my father’s age – that’s why I jumped on him.” 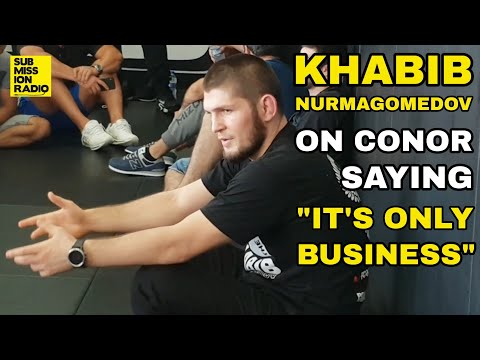 The Russian champion also explained what was going through his head when he fought McGregor. He wanted to damage the Irish fighter as much as possible. He said:

“I was looking for punishment, first of all. I wanted to make him tired – it meant a lot to me when he tapped. He asked me to finish the fight – this is much better than a knockout. If I knocked him out in the second round, you go down, but people are going to talk about, ‘Oh, it’s luck.’ But what about if you smash him all four rounds and he taps? It’s finished there. No more.

I don’t think he ever wants to compete with me because he felt everything. He felt my mental (strength), he felt my control, my striking, all of that – and he tapped. He tried to talk with me (in the cage) about, ‘It’s only business, what this meant for me … please calm down, don’t smash me.’ He tried to get me to relax. We already had finished three rounds (of the) fight, and then he tried to talk about ‘this is is only business’ – it just showed his weakness.”

It’s well-known that McGregor would like to get a rematch, however, he accepts that he will need to win at least once before securing that. Khabib will be the comfortable favourite if the pair is matched up again in the future. Tony Ferguson is ‘the Eagle’s’ most likely next opponent. What’s the odds on ‘El Cucuy’ ending the year as lightweight champion?