Manny Pacquaio is one of the greatest boxers of his era. The 40-year old is the only eight-division champion in the history of the sport. Not only that, but he has god-like status in his native country of The Philippines, with the possibility of him being the South East Asian nation’s next president.

However, he’s set to fight again against Adrian Broner, who is definitely no slouch. The Ohio native is one of the top welterweights in the world and has held championships in four weight divisions himself. That fight is set to go down on January 19, in the MGM Grand Arena in Paradise, Nevada.

When Pacquaio was interviewed about the fight, he found himself interrupted several times by his close friend Michael Blackson, a Ghanaian-American comedian. This is absolutely hilarious, but also full of foul language, so if that ain’t your thing, you’ve been warned. 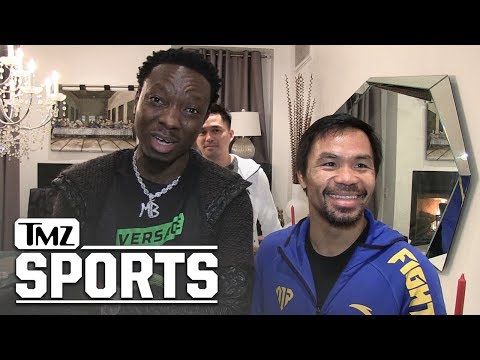 Pacquiao has never been the biggest trash talker in the game, preferring to remain dignified and let his hands speak for themselves. However, Blackman wasn’t going to leave the world in doubt about how the ‘Pacman’ really feels. When Pacquaio was asked what he thinks about Broner saying he could knock him out, the Filipino fighter replied that it’s easy to say but not easy to do. Blackman interrupted:

“What he really meant to say is, it’s easy to say but we’re gonna f**k him up. Punch him in his eye, kick him in his nuts. That short b*tch is going down!”

In all fairness, Pacquaio stayed humble to the last, but he couldn’t stop his friend from unleashing verbal carnage. Pacquaio said: “I’m not going to predict the fight but I will try my hardest to make it like my last fight”. This translated to:

“What he really meant to say man, that’s some bullsh*t. He really gonna f**k this boy up. Send him back to the hood, knock him the f**k out. Really change his life. He’s gonna see about 6 different Pacquiao’s in the f**king ring that night”

We were also given a clear indication of Broner’s financial status, and how exactly Pacquaio is doing him a favour by taking this bout. Yes, Pacquaio might have tried to say he just wants to give the fans a good fight, but we quickly learnt how:

“That’s not what he meant. He is doing him a f**king favour ok? The boy is broke, he ran out of jewellery, he has no money, he lives in the projects. I’m just here to help that poor b*tch out.”

That’s absolutely ruthless. We were also told of how much of a pervert Broner is. There’s really everything you could ask for in this footage. Somehow we don’t think that Manny will be keeping Blackman too close to him if he becomes president of the Philippines…

Jorge Masvidal from being a DECISION fighter to a UFC Megastar

Jon Jones Team: This is a Set Up, They’re Trying to...

Mike Tyson vs Roy Jones Jr PPV was a SUCCESS