Sumo is perhaps one of the most underrated martial arts today. Maybe because it’s essentially used exclusively in it’s own sport. It’s very rare you see a mixed martial artist or otherwise with a sumo base, or even sumo experience.

Displaying exactly why sumo is legitimately dangerous, today’s video is gnarly. With a huge amount of force, this sumo wrestlers knocks his opponent silly with a single blow. These are big dudes, and if they connect it’s over.

Watch on the Youtube player below, as the sumo wrestler scores a harrowing knockout:

If you thought that knockouts were the only cool outcome of a sumo match, carry on reading below:

Knocking your opponent out is not the only method of victory in sumo. The more traditional win comes by knocking the opponent out of the ring. During the next video, we see a much smaller sumo exact a slick win over the larger wrestler.

Watch as the sumo in the brown trim goes all gangster in the arena of combat:

As if that wasn’t enough…

Once a year in Japan, sumo wrestlers partake in a different kind of contest. Instead of trying to knock each other around, they compete with babies in their hands. No longer is the objective to beat the opponent out of the ring.

Instead, during this bizarre spectacle, sumo wrestlers try to make babies cry. It’s certainly a weird tradition, but what more can you say about the kooky Japanese culture? Watch on the Youtube player below sumo fans! 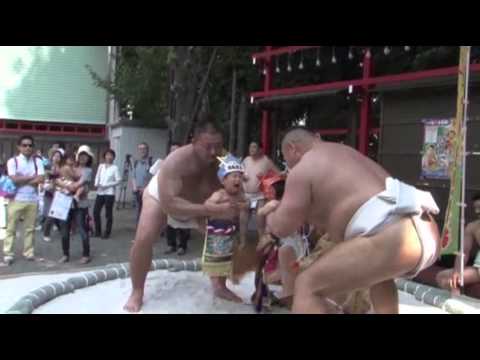 Salvador Sanchez - Jan 10, 2016 0
Just one day after Rafael dos Anjos vs. Conor McGregor is confirmed, this awesome UFC 197 promo is going viral... Conor McGregor has been on...

Watch Brock Lesnar Use One Of The Rarest Wrestling Techniques Ever