In Conflicting Statements Both Khabib Nurmagamedov and His Manager Have Apologised And Justified Their Actions at UFC 229… Is That How An Apology Actually Works?

As the world knows by now, Khabib Nurmagamedov has been a naughty boy. He demolished the UFC’s cash cow Conor McGregor and then proceeded to instigate the worst brawl in the history of the sport – yes even worse than Strikeforce: Nashville because of the number of people watching.

Two members of his team, fellow UFC fighters Zubaira Tukagov and Islam Makachev, were arrested for assaulting Conor McGregor. They were released after ‘The Notorious’ declined to press charges. Meanwhile, Nurmagamedov has seen his pay withheld after his role in the incident, which basically started when he launched himself feet first at Dillon Danis.

Both Nurmagamedov and his manager Ali Abdelaziz have basically apologized for the inconvenience they’ve caused everyone. However, you can see from the statements and footage below that they remained defiant and justified their motives.

Ali Abdelaziz is Khabib’s manager and was repeatedly called a terrorist by McGregor in the run-up to the fight. He issued an official statement. He justified the motives behind Khabib’s assault on McGregor’s team, saying McGregor’s pre-fight antics were the true disgrace. Then he apologized to the Las Vegas police department and Nevada officials for getting caught in the middle. He said:

“I want to congratulate my brother @khabib_nurmagomedov The undisputed, undefeated pound for pound king. There was never 2 Kings from beginning, only one king. This is not the way we want to celebrate such a dominant performance but when you talk about people’s country, family and religion and intentionally try to kill someone like he said and the cornermen running their mouths after, this is the fight game & s**t happens.

The fans got an amazing fight and a great show. I want apologize to the Nevada athletic commission, the governer of Nevada and I want to thank Las Vegas police department and security for doing such an unbelievable job. Now everyone understands who’s the amateur here.” 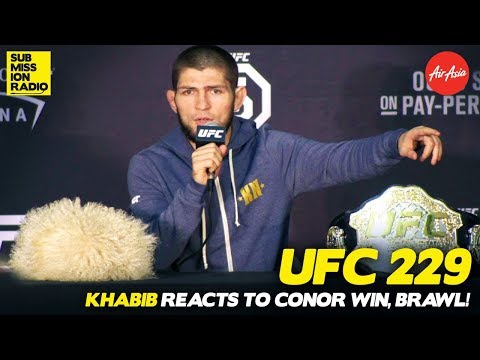 In the post-fight press conference, Khabib Nurmagamedov basically said the same thing. He acknowledged that he didn’t react in the best way and that it was unfortunate for the Nevada State Athletic Commission that they had to pick up the pieces. But he still believes his motives were fair and justified. He said:

“First of all I want to say sorry to Nevada Athletic Commission. This is not my best side. But he talked about my religion, he talks about my father. Why people talk about I on the cage? He came to Brooklyn and almost killed a couple of people. They call him two-weight world champion, but today he tapped. This is respect sport, this is not trash-talking sport. I want to change this game. I don’t want people talk s**t about opponents. About fathers, about religion. You can’t talk about religion and nation. For me this is very important.”

UFC fighter Zubaira Tukhugov is bragging on social media about attacking Conor McGregor at #UFC229: “I slapped him as promised. I promised to make him answer for his words and I did." pic.twitter.com/Iy2QYlUmEt

Perhaps the truest reflection of how the team really feels can be seen in the video above. Zubaira Tukagov might have been arrested by Las Vegas police, along with teammate and fellow (soon to be former) UFC fighter Islam Makachev, but he was by no means remorseful for his actions. In case you don’t speak Russian, he said:

“I slapped him as promised. I promised to make him answer for his words and I did.”

Well… he didn’t really, did he? He tried to jump McGregor two on one, but the Notorious was quicker and saw him coming. What an idiot. This clown is just coming off the back of a 2.5 year USADA suspension. Kiss your UFC career goodbye son. The GOAT Artem Lobov will be toasting your downfall with a glass of Proper Twelve tonight.

The most reckless UFC fighters

Salvador Sanchez - Feb 10, 2018 0
UFC vs. Boxing did not end up so well for the former. After getting schooled in the boxing ring, Conor McGregor invited Floyd Mayweather...