2. Yoel Romero vs. the World

Yoel Romero is one of the most interesting characters in MMA right now.

A former Cuban Olympan, Romero has been a disliked fighter for some time due to frequent steroid and cheating accusations. He is almost 40 and looks like a Cuban Brock Lesnar. He also failed a drug test after his victory over Jacare Souza. After supplying the tainted supplement however, Romero was back fighting after only a 6 month suspension.

He also cut a very bizarre post-fight interview, where he attempted to encourage the USA to not “forget Jesus”. Unfortunately his thick Cuban accent led many to believe he was saying “No to Gay Jesus”.

Then there was “stool-gate”. In his fight against American war-hero Tim Kennedy, Romero was rocked to close out the second round. His corner then bought him some more time by neglecting to take away Yoel’s stool when they were leaving the cage. Romero kept sitting, gaining extra recovery time. He then knocked Kennedy out in the next round.

At UFC 205, his feud with the United States continued when he took on All-American Chris Weidman. Romero again bought himself some more time in between rounds, after his corner doused him with water. They had to towl Romero off, again buying him more recovery time.
Then Romero hit Weidman with a hard knee, ended the fight, and proceeded to march around Madison Square Garden like a soldier. Then through his translator he gave the type of post-fight interview that only Yoel Romero can give. 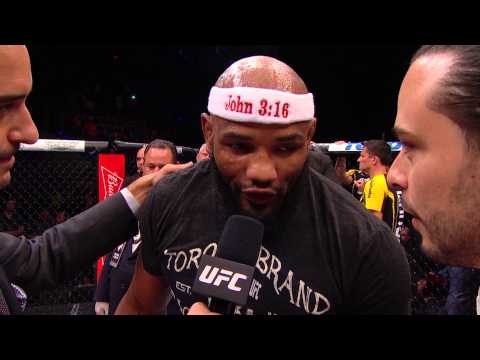