MMA has a knack for producing some of the most bizarre athletes on the planet. Perhaps it is the repeated blows to the head, or perhaps MMA just attracts an odd bunch. Either way the eccentric characters in the world of MMA have engaged in some hilarious rivalries with each other throughout the years.

Many of the rivalries on this list were some of the most exciting and profitable match-ups in the sport’s history. That doesn’t mean they weren’t also good for a laugh at times.

Here are the top 7 most hilarious rivalries in MMA history…

The first rivalry that the Ultimate Fighter ever produced was Chris Leben vs. Jason Thacker.

It didn’t take long for Chris Leben to make a star out of himself. On the show’s first episode Leben decided, after a few drinks, that he was going to urinate on Thacker’s bed. Leben didn’t describe his actions as “urinating” however. He opted to describe what he did as “spritzing”. By Leben’s description he never had a full stream going, but only sprinkled Thacker’s mattress with a light dusting of urine. I guess anyway.

Thacker was a step behind the other fighters on that first season, and it showed. At one point he even asked to be taken off the show, but was encouraged to stay on. On the Season 1 finale show, Leben and Thacker would be matched up. While Leben would dominate the fight, afterwards he apologized and said that Thacker had earned his respect. 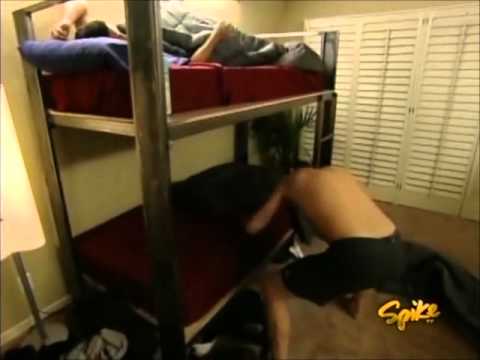