When harnessed properly, the power of Muay Thai is a wonderful thing. This man can pull off super human feats because of his high level conditioning and training…

The age old art of displaying strength or skill that shocks and awes spectators is a very popular one. For centuries the warriors of histories civilisations have put on death defying stunts and displays of physical prowess for our amusement.

Now days it’s dare devils and martial artists that are the trend, and Muay Thai legend Melchor Menor is one of those special humans. Menor has fought in and woc competitions such as the WKA Elite, The KU Super Elite and the WMTF.

As mentioned, Menor is famous for his trick of breaking baseball bats with his shins. A craft perfected by years of hard training and conditioning, his videos have become massively popular in recent years. Here’s a video of Menor demolishing a single baseball bat: 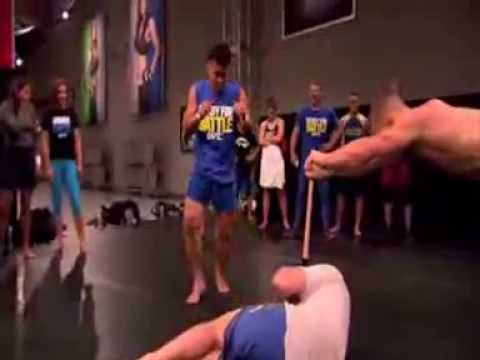 The risky move shows that Menor has clearly perfected the art of low kicks. His body shape and movement is exactly how it should be, and he transfers the motion of his upper body and hips precisely in to the output of his kick.

Very few would be able to attempt, let alone actually succeed at breaking one bat with any part of their body. Menor is clearly on another level.

So how does he do this? Well, as well as a video of Menor breaking two bats with two kicks, you’ll see a cool video of how to do this. WARNING: Only attempt this if you are as well trained and conditioned as Menor, otherwise you could get very hurt.

Skip to page 2 for the tutorial by Melchor Menor…

Darren - Apr 3, 2018 0
Ouch! Ronda Rousey Was Thrown Through a Desk by Stephanie McMahon at a WrestleMania 34 Build-Up Event...  Ronda Rousey’s WWE honeymoon period is officially over....

Floyd Mayweather Facing Civil War as ANOTHER Fighter Walks Away

WATCH: Khabib Gets Swarmed by Thousands of Russian Fans