Fighting is one of those things everybody wants to do. Truthfully, only a very small percentage of people have the guts to do it for real. Getting in to a fight is not exactly a pleasant experience, but it’s no doubt glamorous in some ways.

It’s not a co-incidence that celebrities want to rub shoulders with fighters. This fad is also nothing new. Looking back over the years, famous people have always wanted to be associated with tough guys and girls. Very few would challenge the professionals to a fight, though.

This is Melvin Manhoef, it’s fair to say he’s a pretty terrifying dude. Manhoef has the nickname ‘No Mercy,’ which tells you almost everything you need to know about him. He’s a a Dutch-Surinamese MMA fighter and kickboxer.

During his 21-year career, Manhoef has competed in 49 kickboxing fights and 46 mixed martial arts contests. Knocking out 27 men in K-1 rules, and 28 from 30 in MMA, Manhoef is truly a scary dude.

So why would anyone, let alone a guy who is famous from Youtube, want to fight Manhoef?

In what appears to be a semi-humorous scenario, this massive Youtube ‘celebrity’ named ‘Qucee’ challenges Melvin Manhoef to spar with him. ‘No Mercy’ is more than happy to oblige the larger opponent in his request.

When they lace up the gloves, Manhoef shows a little bit of mercy, mainly that he doesn’t try to knock the guy’s jaw out of line. Manhoef does, however, land some seriously punishing body shots on Qucee.

Skip to 9 minutes for the fight! 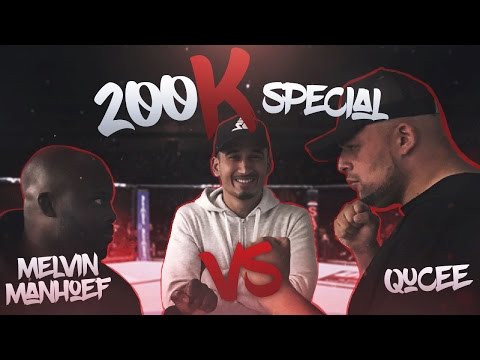 The 40-year old kickboxer still has enough in the tank to take out someone who is nearly twice his size. It was probably not a good idea by Qucee to try and land those ridiculous bombs at the beginning of the sparring session.

WATCH: Poirier vs Pettis Ends Up Looking Like a Horror Movie

Atilano Diaz - Nov 12, 2017 0
It’s not everyday you get to witness an instant classic. But every once in a while, something happens that just leaps out of the...