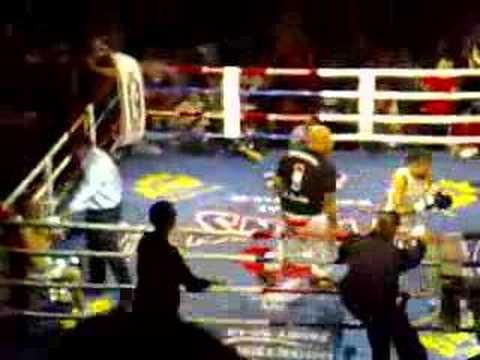 Belgian actor Tom Waes had a TV show called ‘Tomesterom’ for several years in which he would undertake a different challenge ever week, from surving in the forest to learning to fly an aircraft.

In one episode he was tasked with becoming a boxer, and was given three months to train for a televised fight with female kickboxer turned MMA fighter Germaine de Randamie.

Waes would have a 40lb weight advantage going into the fight, but ‘The Iron Lady’ had a vast amount of experience in kickboxing to fall back on, having amassed a hugely impressive 47-0 record.

Waes didn’t hold anything back in the fight and in the final round was throwing everything he had into his punches in the hopes of a stoppage win when GDR made him pay by suddenly landed a clinical straight right down the pipe and knocked him out.

Darren - May 12, 2019 0
MVP Got Served Up the First Defeat of His Career After Brazil's Douglas Lima Landed a Massive KO to End the British Fighter's Hopes...