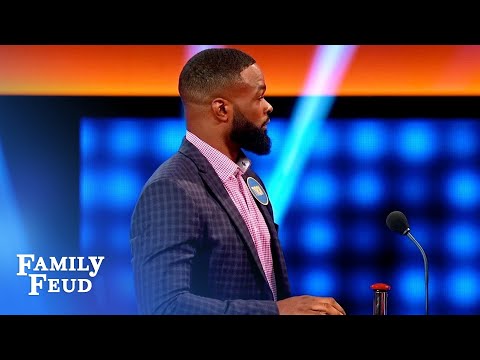 For a recent episode of Celebrity Family Feud, stars of the UFC and Bellator were teamed up to compete against the WWE’s Bella twins and members of their family.

Lining up to represent MMA were current and former champions Randy Couture, Chuck Liddell, Tyron Woodley, Ryan Bader and Ilima-Lei Macfarlane, but in the end they weren’t able to get the better of the WWE stars.

However, Bellator double-champ Bader won the heart of host Steve Harvey when he was asked to suggest something that you bounce up and down on and he stated, “My wife.”

“Yeah!” Harvey said multiple times as he strutted around on stage. “My favorite answer. I don’t care if it ain’t up there! How that ain’t number one is beyond me!”

Darren - May 29, 2020 0
They are two of the most storied fighters in MMA. One was a swirling whirlwind of destruction and the greatest middleweight in the history...

Watch The UFC’s Biggest Stars Fall In This EPIC Video